We look back at artist Miwa Komatsu‘s monumental speech on the theme of harmony between humanity and the global environment at THE NEW CONTEXT CONFERENCE 2021 hosted by Digital Garage, Inc. in August of this year. Through her new work, NEXT MANDALA – Home of Soul, which was first shown at the conference, and her speech, we will take a closer look at Miwa Komatsu as an artist. 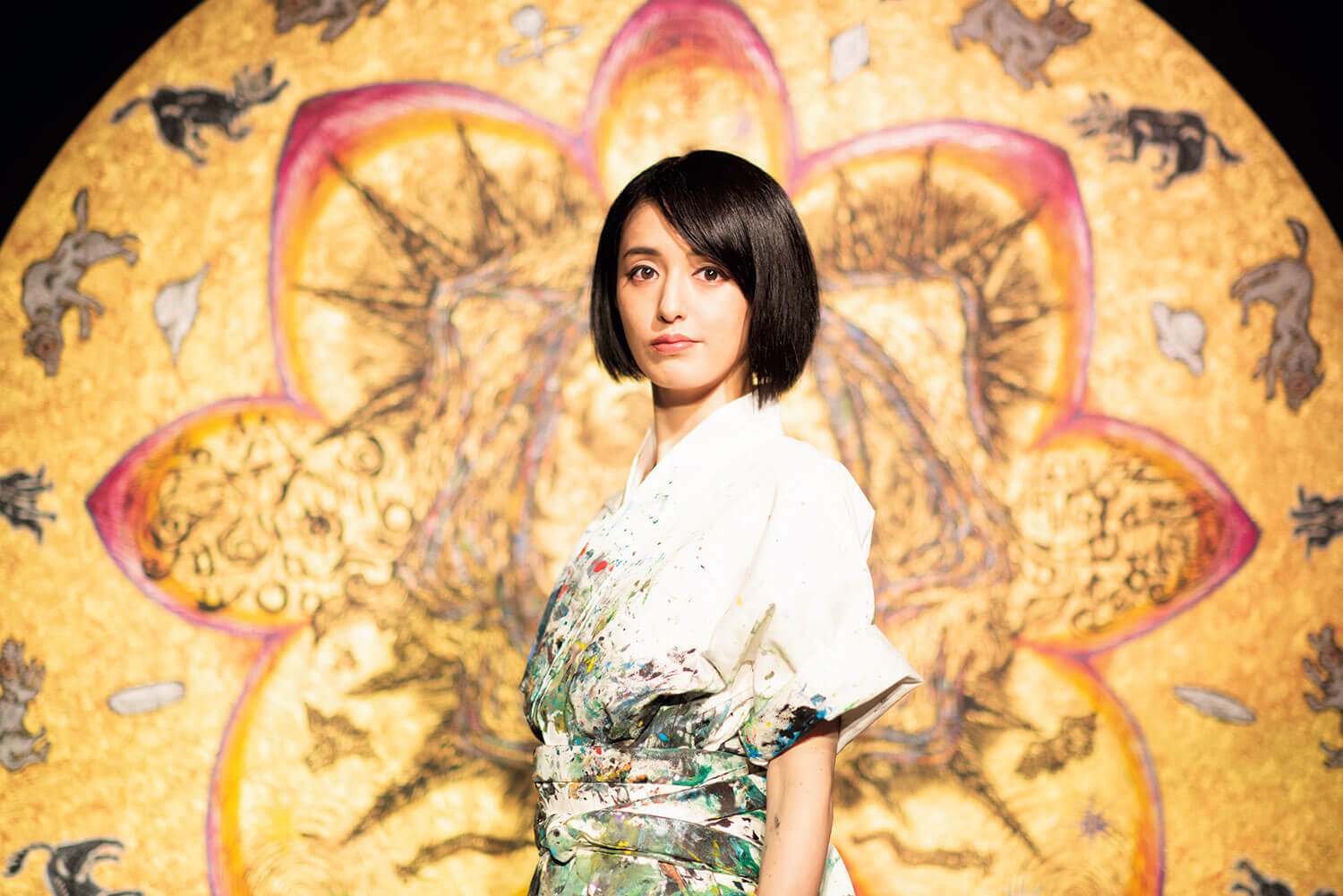 I live to fulfill my purpose. Part of that purpose is to make art that serves like a medicine to heal heart and soul, so every day creating is the most important thing to me.

Each day before starting to paint, I meditate and pray. Meditation enables me to rid myself of my ego by focusing on one thing, which then serves as a starting point for me to create various things, When creating a piece of art, I focus my attention on the object that I am about to paint, then I try to suppress my ego and when I achieve an innocent state of mind I get a vision of what I am supposed to paint. We often hear people tell us to open our third eye, but when I reach the state of consciousness where I get the visions I call it a “mini theater” and I paint the things that I see there tell me to, It’s fair to describe my work and my meditation as a process of transforming immaterial things into material things.

It is sometimes said that we are living in the Anthropocene age, whereby human activity has a large effect on the environment. Above all, the period following WWII is said to be The Great Acceleration and we have to face the fact that we are dealing with limited resources. The evolution of science is filled with hope for space and we have come to intimately realize that Earth is one part of the vast expanse of the cosmos.

However, the era of Great Acceleration is witnessing the collapse of Earth’s system. Why is it that while things and information are available in unprecedented abundance, people are not experiencing a similar state and the gap between rich and poor continues to grow? Even though we have sacrificed nature and the Earth’s resources, can we find a good answer to the question of whether we are truly happy? “Being happy” is about each of us facing up to the role or mission or destiny that each one of us has been assigned.

Therefore, it is important to know what it is that our heart and sensitivity and soul truly desire. In my case, through my daily meditation and prayers I have discovered that my role is to paint and I live to fulfill that purpose.

I started my meditation practice in earnest in 2015. It began when I visited a sacred limestone cave in a jungle in Thailand. After starting to meditate inside the cave I was able to recognize a mysterious presence emanating from nature. After a while I began to hear a sound just like a hymn you would hear at a church and I got the sense that l was being invited into a majestic world. I saw beams of light emitted by spirit beings and the appearance of divine SPIRIT. I learned that Mother Earth is so generous in letting us learn so much when people don’t have demonic attitudes and release themselves innocently.

Yes, Earth is Mother Earth. Amid my deep prayers going beyond the boundaries of mankind and national borders, the Earth itself is our home. Because I have had that experience, this time I was able to take on the theme of this Earthshot event with the sense of destiny that was assigned to me.

So, in order to take on this theme, I decided that there was only one place where I could create the art work – Koyasan. Just like Kukai, The Grand Master who Propagated the Dharma, was led to the location of Koyasan by wild dogs, I feel that I am guided by divine SPIRIT or some kind of supernatural force. Koyasan is known as a World Heritage Site, and it was founded around 1200 years ago by Kukai. It fuses people and nature and many people pray there every day and it is known as a place for meditation. When I actually went there, Í remember being surprised at the sense of proximity to nature and the animals and divine SPIRIT that live there. Also, the eight sacred mountain peaks that serve as a natural barrier to the terrain somehow makes one’s spirit seem defenseless and opens one up to deep meditation, so it was the perfect place to paint this piece. 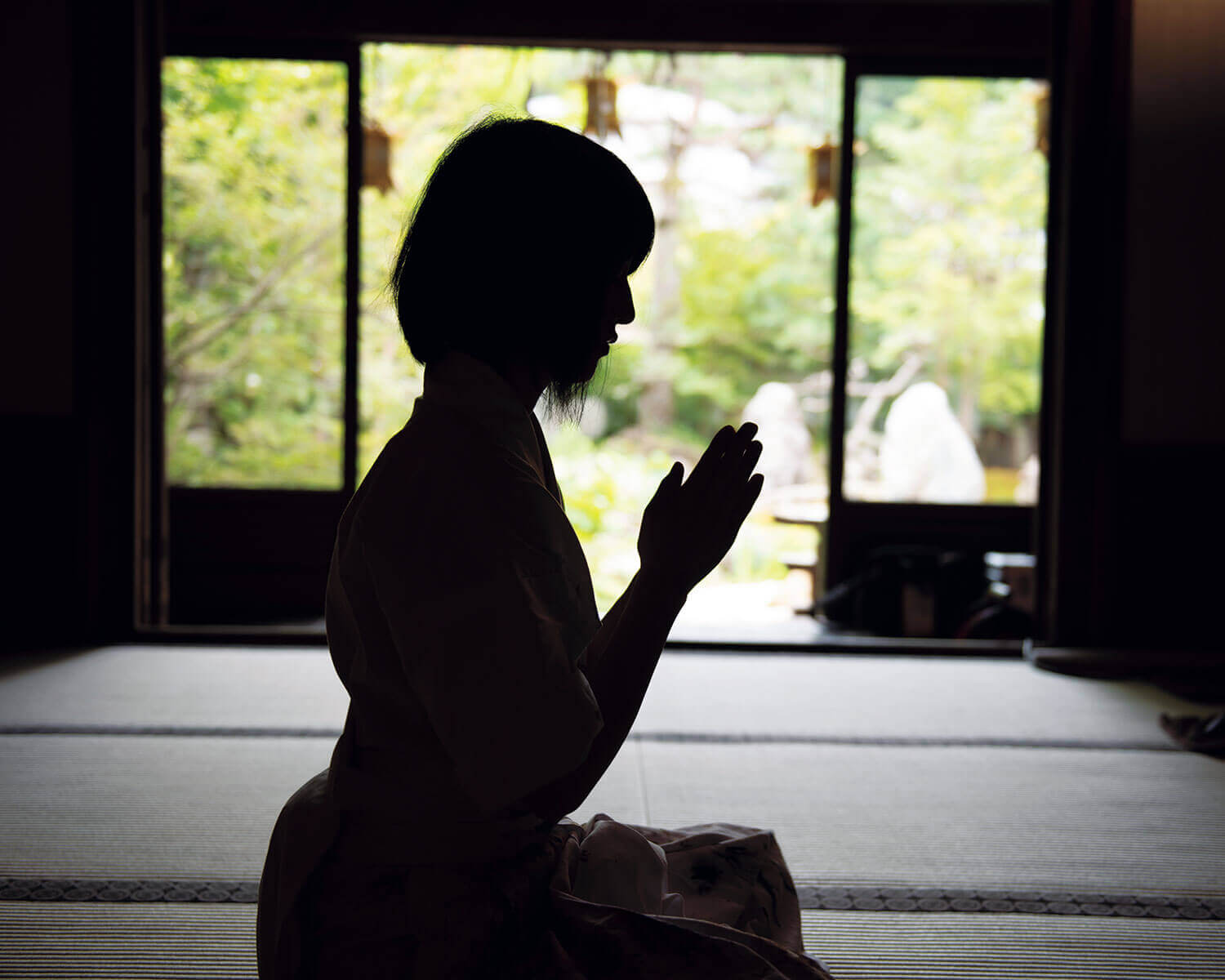 On July 3rd 2021, I took a gold-leaf canvas and my paints to Sanboin monastery and started to create this artwork for Earthshot. I have long since had the attitude of not denigrating people’s religions or spirituality but rather sought to learn from each of them. In order to learn from the source of legends and people’s prayers from various different cultures across the world, I have interacted with various religions and I hope to continue to learn from them in the future.

Kukai is known for venerating the Shinto shrines that existed in the Koyasan locale and for the importance he placed on the coexistence of Shinto ]and Buddhism. Perhaps because of this, I was flooded with lots of creative ideas from the first time I meditated at Koyasan, with the nature and the space itself serving as the starting point
for energy from outer space that I was able to channel like an intermediary and transform into a creative form, which allowed me to paint the work in a surprisingly short timeframe. It was as if cosmic energy and I were merging, and the experience was like seeing the earth from space.

Among the works that I have created up until today, there is a piece titled Area 21, which depicts the Earth divided into 20 zones. The additional zone that makes up the 21 in the title represents the heavens or space. At an exhibition held four years ago l did a live painting where I depicted divine SPIRIT like the two elements of the Yin Yang principle and it was just like Indra’s net, which doesn’t restrain the connections between everything and freely includes all that exists. That work felt like the culmination of the path that I had followed up until that point.

The painting I completed at Koyasan this time was conscious of the gaze from further away, which included Area 21. During the process of painting, I felt as if I was being pushed back by a great force, and my brush moved at an uncanny speed, ignoring my ego and becoming something that was not bound by my laws. It was like a mandala, a piece of the path of all living things leading purely to heaven. 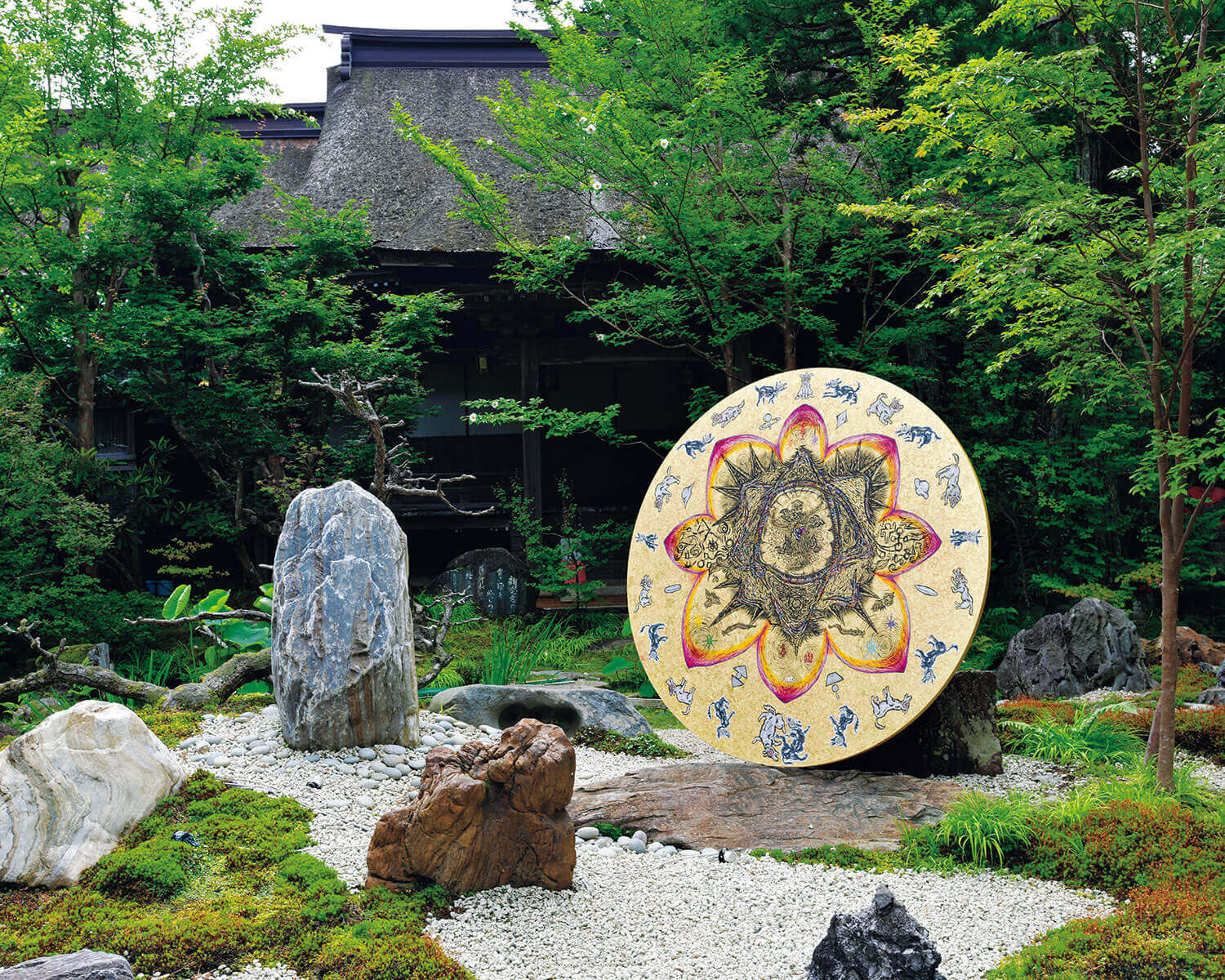 “The work NEXT MANDALA -Home of Soul” placed in the Mandara Garden at Sanpo-in Temple in Koyasan, where the production took place. Photo：Yoshimitsu NAGASAKA

From the very beginning, I have used the term “Great Harmonization” to describe the power of putting various things together and turning them into a design and that has turned into a motif running through my creations, but from the process behind the piece that I created while residing in Koyasan I learned that this is the power of harmonization that the world needs right now. From Great Acceleration to Great Harmonization – that is the meaning behind the artwork that I created for this event. The piece that was completed at Koyasan and the two triangular works that I painted live here at the event venue come together in a Great Harmonization to make it finally complete. 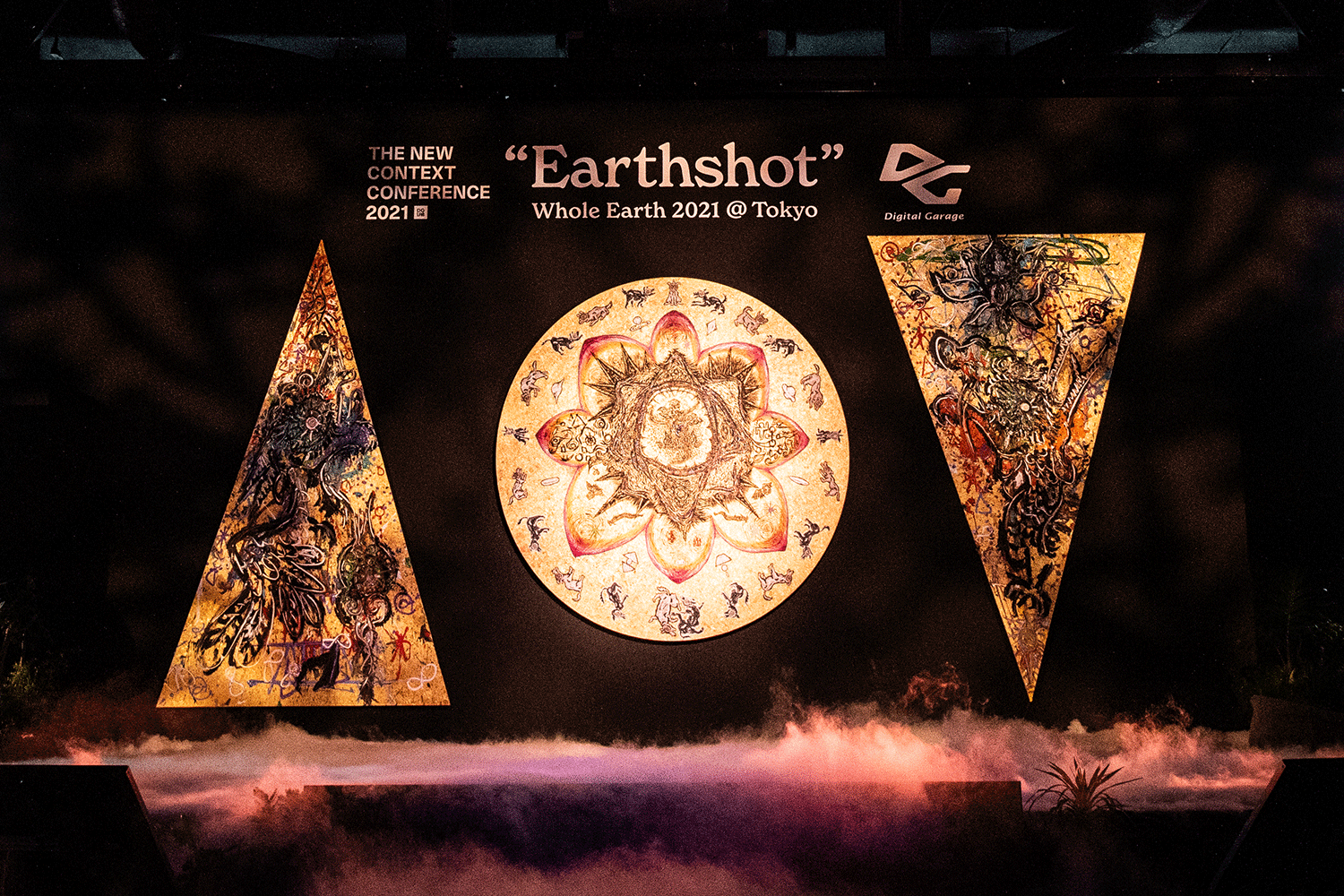 “NEXT MANDALA～Home of Soul”. At “THE NEW CONTEXT CONFERENCE 2021.” Photo：Tatsuya AZUMA 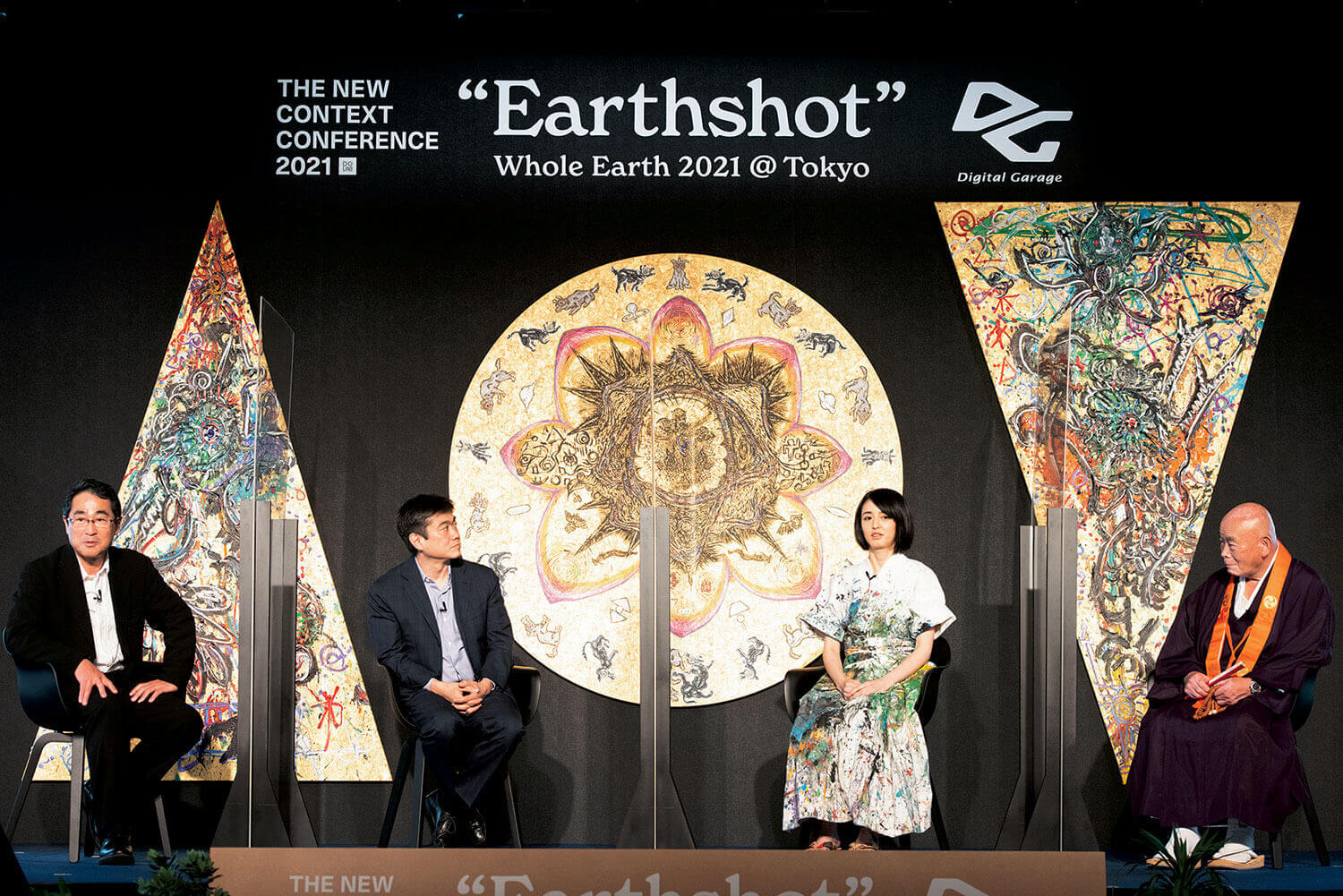 For me, live painting is not a type of performance, but rather a ritual or form of prayer and also a kind of meditation. When painting the canvas I was filled with a sense of respect for the energy that is gathered in this place, as well as a sense of destiny. For future generations we should not mistakenly believe that the pleasures
of our physical bodies are happiness, but instead should try to get close to that which our souls truly desire and while fulfilling the mission that we have been given, and the era whereby a Great Harmonization, for other people, for nature, for space can be achieved. My hope is that I can contribute to that process through my prayers and my paint brushes.

ーExcerpt from Miwa Komatsu’s speech “Next Mandala – Home of the Soul” at THE NEW CONTEXT CONFERENCE 2021. 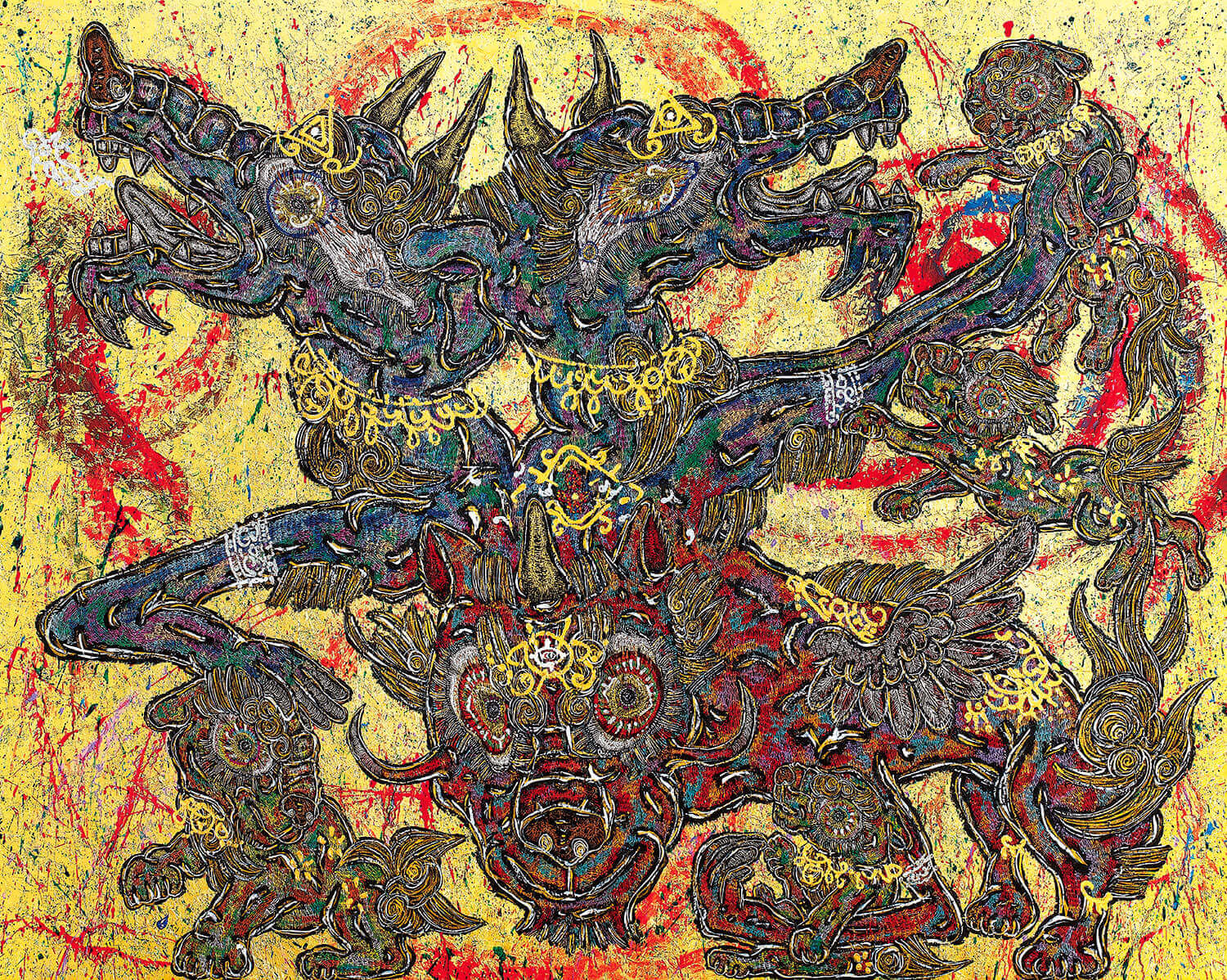 In 2018, Miwa Komatsu’s solo exhibition “Yamato Power to the World” at Mitsukoshi Department Store in Nihonbashi, Tokyo, attracted about 30,000 visitors in a total of 12 days and generated over 340 million yen in total sales.

In 2019, INORI=Prayer, a VR work collaborated with HTC VIVE ORIGINALS, became the first VR work by a contemporary Japanese artist to be nominated, and was officially invited to compete in the VR section of the 76th Venezia International Film Festival. In 2020, she was chosen to design the charity T-shirt for the 24-hour TV program “INORI for our planet, ”and she has become a household name.

The art critic Junji Ito once described Komatsu as “the darling of the times, and therefore likely to be misunderstood. However, I am hopeful that her keen sensitivity, a quality that does not suit an age in which everyone is trying to be a bystander, will enable her to show the true image of the times. As the world is now facing a major turning point, NEXT MANDALA~Home of Soul that Miwa Komatsu has shown us is probably the “true image of our time” that we should be aware of.

In any case, the coverage of this conference made me realize that what Miwa Komatsu is challenging is a human history that goes beyond the category of art history. 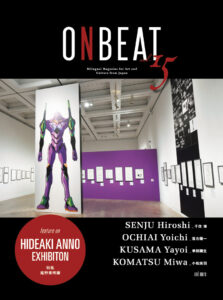 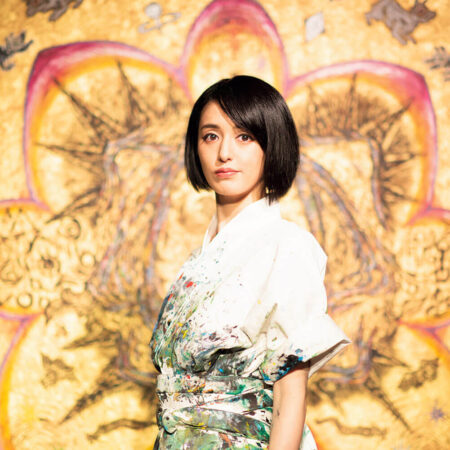 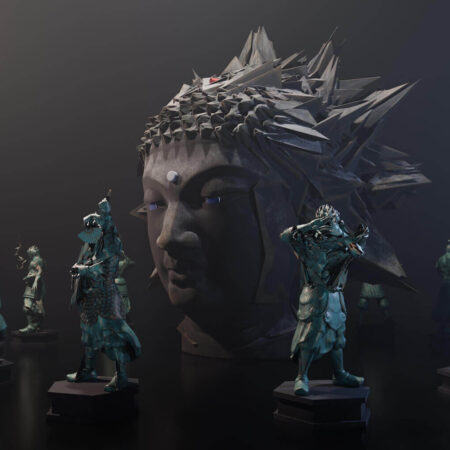